Also to be found in the chancel of St Mary’s Church is a brass plaque which was the first “official” memorial to record the names of Goudhurst war dead. On 4th February 1919 a public meeting was held in the Parish Hall to consider, as the Kent & Sussex Courier reported, “the subject of providing a Peace Memorial or a memorial to those fellow-parishioners who have fallen in the war.” With Sir Charles Jessel in the chair, the meeting concluded that the most fitting “first memorial” should be in the form of a tablet in the parish church “to perpetuate the names of those parishioners who have been killed during the war.”

The brass plaque was made by Messrs. Culn, Gawthorp & Sons at their foundry in London, is headed with the dedication: “To the glory of God and in proud and affectionate memory of the Goudhurst men who gave their lives for their country and the cause of right and freedom in the Great War 1914-1918.” This memorial lists names in order of military/naval rank, shows their initials and the name – much abbreviated due to space constraints – of their regiment or applicable unit. The details given in this last respect are, with the benefit of hindsight, a little unreliable in some cases – perhaps unavoidably so, where an individual served during the Great War with more than one unit.

After the Second World War, a second brass plaque – this one made by F. Osborne & Company Ltd of London WC1 – was set beneath the original and in its own matching alabaster surround, commemorating six individuals who had died in the Second World War. The plaque was unveiled on 22nd May 1949 during an “impressive service in St Mary’s.” 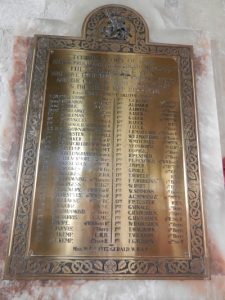 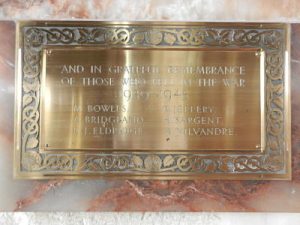