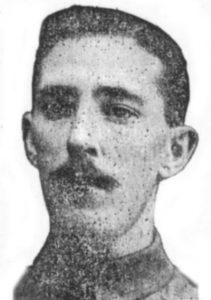 Hebert was born in Goudhurst on 17th December 1890, where the family home was in Beresford Road. A farm-worker till joining the 2nd Buffs in 1909, he spent five years with them in Asia, landing in France in January 1915. Invalided home from the Ypres sector, on his return he transferred to the 6th battalion. He is one of six men from Goudhurst who were killed at the battle of Loos. His name is on the Loos memorial in Dud Corner cemetery.

Parish Magazine, St Mary’s, Goudhurst, January 1916
With great regret we chronicle the fact that the report as to the death of Herbert Penfold has proved to be only too true, though it was not officially confirmed till December 11th. Herbert Penfold was born in Goudhurst and educated under Mr Gripper at the National School. He worked on one farm and another and enlisted in the Buffs when he was 19. His service was principally in India and Hong Kong. He was some time home on sick leave. He wa with the regiment all the summer in Flanders and has been missing since the attack on Loos on October 13th.

Kent & Sussex Courier 17th December 1915
Goudhurst Man Missing
Official notice has been received by Mr George Penfold, of Beresford road, Goudhurst that his son, Lance-Corporal H. Penfold was posted as “missing believed killed” after the engagement (somewhere at the Front) on 13th October last. The flag on the church tower was floated had half-mast on Saturday last, and a “Commendatory Prayer” was used in the services at the Parish Church. The deceased joined the Militia at Maidstone and afterwards entered the 2nd Battalion of the Buffs, going to Hong Kong, Singapore and India with them. After spending last Christmas amongst his friends he went to the Front, and after a time was invalided home suffering from sciatica, and was six weeks in a Bristol Hospital. A visit to his home was followed by a second visit to the Front, as a member of the East Kent 6th Battalion, where he lost his life at the age of 25 years.