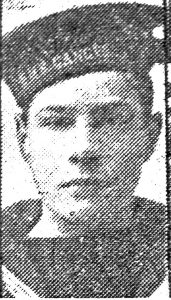 Arthur was born in Hawkhurst on 17th May 1900 and moved to Goudhurst when his father became coachman at Gore Court. After attending Winchet Hill School, Arthur first worked as a gardener at Gore Court, then joined the Royal Navy as “Boy, Second Class” at HMS Ganges, a shore establishment in Suffolk. His first and only posting to a ship came in November 1917, to HMS Africa, whose main role was escorting convoys along the west coast of Africa. An influenza epidemic on the ship in September 1918 took the lives of fifty members of the crew, including Arthur Bellingham, the youngest of all the servicemen on our parish war memorials. He is buried in Freetown (King Tom) Cemetery in Sierra Leone.

Parish Magazine, St Mary’s, Goudhurst, October 1915
We regret to hear that Signaller Arthur Bellingham, R. N., died of influenza on the 17th of last month. Here again we have to await further particulars as he was serving somewhere in the East and only telegraphic information has so far been received. Previous to joining the Royal Navy he worked with his father at Gore Court. We can assure the family the sympathy of every one in their bereavement.

Kent & Sussex Courier 27th September 1918
Signaller Bellingham
Mr A Bellingham, of Gore Court Cottages, has received notice that his son Signaller Arthur William Bellingham (HMS Africa) died on board his vessel on the 17th September (sic), at the age of 18. The lad joined the Navy on 22nd November 1916 and was drafted to HMS —– at the end of November last.