In May 1911 a Public Meeting was held in the Village Hall to discuss proposals for the celebration of the Coronation of King George V and his Queen, Mary. Sir James Stirling presided over the meeting and a Coronation Committee was duly elected. At a subsequent committee meeting in the Parish Room three sub-committees were formed:

A schedule of events was agreed:

A.M.
5.0 Parish Church Bells will ring, and at intervals throughout the day

11.0 Service in the Parish Church (It is hoped that everyone will
endeavour to attend)
Followed by the unfurling of a new Church Flag, presented by Mr E Clemetson, and singing of the National Anthem by the choir from the Church Tower
After which two trees will be planted on the Plain to commemorate the occasion

The Goudhurst Brass Band will be in attendance throughout the day

P.M.
1.30 punctually. Everyone is requested to assemble on the Plain and sing the National Anthem, led by the School Children, who will then proceed to Mr Fry’s field (kindly lent for the occasion) for SPORTS, AMUSEMENTS, TEA

3.30 Children on School Lists will assemble outside Tea Tent and
sing patriotic songs

4.0 Presentation of Coronation Mugs and Tea for School Children, followed by Tea for all others

PRIZES will be awarded before starting for the following:-

8.30 punctually. Torch-light Procession will start from the Plain for the Bonfire Field opposite Taywell (kindly lent by Mr Large). Torches will be on sale, price 3d.

10.0 punctually. Bonfire and “God save the King”

Tea — Invaluable assistance can be given in the Tea Tent from 9.0am onwards

The Finance Committee appealed for donations to pay for the proposed celebrations. The Tea and Entertainment Committee asked villagers to help meet the cost by donating “cakes, fruit and dainties” for the Teas. They also asked for willing workers to go along on the morning of Coronation Day to help cut and butter bread, and to take their own knife with them.

Coronation Day began at 5am when the bells of St Mary’s Church rang out. At the same time, to make sure the village was awake, Mr Stewart Clarke fired a 21 gun salute from a small cannon on the Plain. Holy Communion was celebrated at 8am and by 9am a number of people had already gathered at the Tea Tent to help prepare for the afternoon Teas. 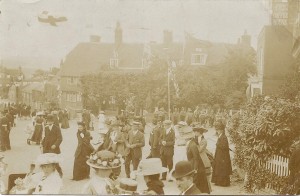 At 11am a well attended service in the church was conducted by the Vicar, the Rev. A. C. J. Pace and immediately afterwards, the congregation gathered outside to see a new flag unfurled on the church tower by Mrs Clemetson, whose husband had presented the flag in commemoration of the Coronation. The Vicar said a short prayer and the choir sang the National Anthem from the top of the church tower with the watching crowd joining in.

The crowd then walked down the High Street to the Plain where an Oak tree and a Copper Beech tree were planted by George Brackfield, aged 5 years & 8 months and Mary Collison aged 8 years & 5 months. They were the the youngest children with the names “George” and “Mary” attending the schools.  Three cheers were given for the King and Queen and an extra cheer was given for the two children. 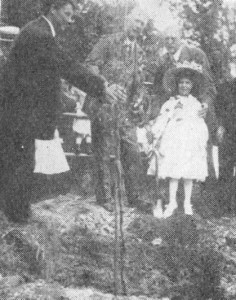 At 1 ‘o’clock a Union Jack, presented by Mrs Murray, was hoisted at the school to loud cheers from the children. The school children sang “This is King George’s Crowning Year”, followed by the National Anthem and then filed past the flag and saluted on their way back to the Plain. At the Plain they were joined by the children from Winchet Hill Schools. The Goudhurst Band played as the crowd once again sang the National Anthem followed by three cheers for their Majesties.

This over, the children, carrying Union Jacks and many of them dressed in red, white and blue, marched from the Plain to Mr Fry’s field in Back Lane. Here there were swings, provided by Messrs Davis and Leaney, and the games and races began. At around 3.30pm, after several races had been run, the school children from Goudhurst and Winchet Hill assembled outside the Tea Tent and sang a number of patriotic songs.  At 4 ‘o’clock it was time for them to sit down to tea and each child was presented with a Coronation Mug as a keepsake.  Afterwards, as they left the tent, each child was given an orange and a bag of sweets. It was then time for the adults to have their Tea.

It was well after 6 ‘o’clock before all the races and games had finished. At 7 ‘o’clock, members of the village’s organisations and societies assembled on the Plain ready to take part in the procession which was lead by Mr Hobbs, dressed to represent Lord Kitchener and riding a white charger. Goudhurst Band marched behind him leading members of the organisations and societies. Behind them came the fancy dress entries followed by the decorated vehicles and prams. The procession marched down North Road to Lidwells Corner, up Chequers Road to the Chequers Inn, and then back through the village to the Plain.

By 8.30pm it had started to rain but, that didn’t stop the torchlight procession from the Plain to Mr Large’s field, opposite Taywell, where a bonfire had been built and a firework display had been set up. After the firework display,  the bonfire was lit at 10pm to the cheers of the watching crowd and the singing of the National Anthem. While the fire burned many people in the crowd were dancing. As the flames died down, the celebrations came to a close and the crowd began to disperse. Everyone was in good cheer but tired as they made their way home after a busy day of celebrations.