8th May 2020 marked the 75th anniversary of VE (Victory in Europe) Day.  In Goudhurst, VE Day was celebrated on Saturday 8th June 1946 when the annual carnival was dedicated to “Goudhurst Victory Celebrations”.

As always, on such occasions, a committee was set up and a full day’s programme of events was arranged. Chairman of the committee was Mr William Burfield, the village butcher. The programme followed much the same itinerary as previous village celebrations had done and the timing of events was very precise.

The day began at 9am with the ringing of the bells at St Mary’s Church. This was followed at 9.30am with music from the Goudhurst Brass Band on The Plain. Next, at 9.45am, came the Parade of all organisations and societies in the village who made their way to St Mary’s Church for a service at 10.15am.

At 12 midday a dinner for ‘Old Folks’ was served in the Parish Hall. The dinner was given by Mrs Weeks of Weeks’ bakery and the refreshments were given by Mr & Mrs Bucknell of the Vine Inn.

The main event of the day was the carnival parade. All entrants gathered on The Plain at 6pm for judging. There were 11 classes of entry; 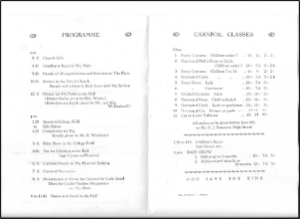 1st, 2nd and 3rd prizes of varied sums of money were awarded to all classes, with an extra 4th prize for the children’s classes. After judging, the entrants processed around the village and returned to The Plain for presentation of the prizes by Lady Jessel. Each programme was printed with a ‘lucky number’ and a prize was awarded for the winning number.

The busy day was rounded off with a dance and social in the Parish Hall from 9pm until 11.45pm.

On 8th May 1995 Goudhurst celebrated the 50th anniversary of VE Day. Councillor Marion Sergeant was asked by the Parish Council to co-ordinate a programme of events for the day. Residents and businesses all came together to prepare for the occasion.

The weather was dry and bright making the day itself a great success with crowds of people arriving from the Parish and beyond. 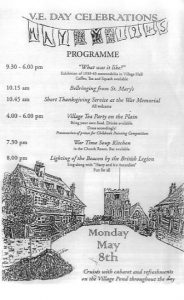 Scheduled events for the day started at 10.15am when St Mary’s Church bells began ringing. Then, at 10.45am a well attended thanksgiving service was held at the War Memorial on The Plain. From 4pm to 6pm there was a tea party on The Plain.  People were asked to bring their own food and to “dress accordingly”.

A celebratory cake had been baked and decorated by Peter Smith of Weeks the Bakers for the occasion.

At 7.30pm it was time for the highlight of the day. A ‘War Time Soup Kitchen’ and a bar were set up at the Church Room. The adjacent playground was lit with fairy lights and everyone joined in a sing-along.

Lastly, at 8pm, the nearby village beacon was lit sending flames high into the air.

Throughout the day there were music and refreshments available at The Plain by the village pond and a painting competition for the children. Prizes were presented to the winners at the tea party. An exhibition of 1939-1945 memorabilia called “What was it Like?” had been laid out in the Parish Hall.

Unfortunately, the Coronavirus (Covid-19) pandemic marred celebrations in 2020 when the “lockdown”, which began in March, prevented people from getting together with friends and family to mark the anniversary. However, Goudhurst residents were not downcast and many  homes and businesses in the Parish were suitably decorated in ‘red, white and blue’ for the occasion. One resident even baked a celebration cake using an authentic war time rationing recipe. The Local History Society recorded the decorations – and the cake – for our archives with a series of photographs, a small selection of which is shown below. 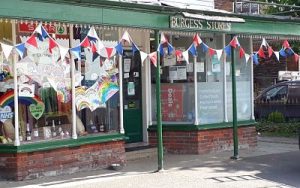 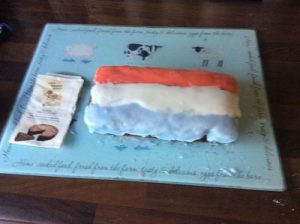