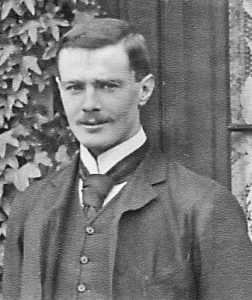 Born in Goudhurst on 19th December 1872 the fourth surviving child of James Sanderson Clarke, Vicar of Goudhurst from 1864 to 1910. After working as a clerk in London, he emigrated to British Columbia in 1910 aged 37. He enlisted immediately in August 1914, deducting five years from his true age in order to ensure acceptance. The Canadians first entered the front line on 15th April near Ypres where, in the frantic aftermath of the Germans’ first ever gas attack, Basil was killed nine days later. His name is inscribed on the Menin Gate.

Kent & Sussex Courier 16th July 1915
Missing – it is feared that Mr Basil Clarke (a son of our late Vicar) was killed on the 24th April, as he was with the Canadians in their great fight on that day. Private Shaw, who had known him in British Columbia, enlisted with him and fought only a few yards from him at the Front, by a singular coincidence was sent home as one of the wounded to Gore Cottages, situated in the very parish about which he had often heard his late comrade speak. There is a bare possibility that Mr Clarke may have been taken prisoner.