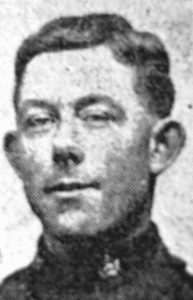 Bertram Harris was born at the Chequers Inn on 28th May 1888 where his father was the pub landlord before moving to run Lime Trees Farm. Bertram worked there before emigrating in 1910 to farm in Canada, being joined later by one of his brothers. He volunteered within weeks of the outbreak of war and served in Europe with No. 2 Field Ambulance of the Canadian Army Medical Corps until gassed in August 1917. Deemed unfit for further service at the front, he transferred to HM Hospital Ship Llandovery Castle. Contrary to the Hague Convention, on 27th June 1918 the ship was sunk in the Atlantic by German submarine U-86 with the loss of 234 lives, including Bertram Harris: these victims are commemorated on the Halifax Memorial, Nova Scotia.

Parish Magazine, St Mary’s, Goudhurst, August 1918
Our Roll of Honour
Pte. Bertram D’Arcy Harris, Canad. A.M.C., was born at Goudhurst and educated at the School. For awhile he helped his father at Lime Trees, but in 1910 he emigrated to Canada. There he was joined by a brother, and they took up a farm together. In 1914 he at once joined the Canad. A.M.C. and came to Europe with an early contingent. In August 1917, he was badly gassed by a shell bursting close beside him; he was cruelly burnt, and for 24 hours he was blinded. However, he made a very fair recovery, but as he was unfit for service at the actual front he was given a berth as Orderly in a Hospital ship. The trips to and fro did him much good. He was on duty in the Llandover Castle which was torpedoed by the Germans, and lost his life on that occasion. He wa in this 29th year.

Kent & Sussex Courier 19th July 1918
Pte. B D’Arcy Harris
The latest name – the 35th – to be inscribed on our village death roll is that of Bertram D’Arcy Harris, aged 29, the second son of a well-known resident Mr William Harris, formerly a carrier to Tunbridge Wells but now of Lime Trees Farm, Goudhurst. B D Harris was born at the Chequers Inn in this parish and educated at the village school. He worked on the farm with his father for a time and then emigrated to Ontario where he was first occupied in farming., and afterwards in engineering work. When the war broke out he joined up in Canada and came back to England with the first contingent of Canadians to Salisbury Camp. In due time he crossed over to France, being attached to the Canadian Army Medical Corps. On the 30th of August 1917 he was seriously wounded and gassed and was then sent to Liverpool Hospital. As soon as he was considered sufficiently recovered he was ordered back to France, but on being found unfit for active service he was employed on board the Hospital Ships which conveyed wounded Canadians back to Canada, and he was on board the “Llandovery Castle” which was recently so ruthlessly destroyed by the Huns. He was at first reported as “Missing – no doubt drowned” and afterwards his relatives were given “No hope” of his safety. He was of a bright , cheerful willing disposition – in the words of one who knew him well: “well liked by everybody”. His last visit home was made about Christmastime. His younger brother , Reginald Stewart, is in France just recovering from a wound in the head.