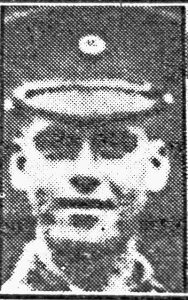 Cyril was born in Paddock Wood on the 16th October 1898 but lived in Wickham’s Row (now Rope Walk), Goudhurst for most of his life; he left school at 12, working first as a paperboy and then as a gardener at The Grange. He enlisted in March 1917 and went abroad in January 1918, joining his battalion near Ypres. On 11th April the battalion was rushed from Arras to Meteren, a French town 15 miles south-west of Ypres, to join frantic Allied efforts to stem the strongest German advance since 1914. In the mayhem, Cyril Batchelor was lost, and he is commemorated just across the border in Belgium on the Ploegsteert Memorial to the Missing.

Parish Magazine, St Mary’s, Goudhurst, June 1918
Pte Cyril Edward Batchelor, Queens Ry W Surrey Regiment, was born at Paddock Wood but edcuated at Goudhurst. On leaving school he worked for three years for Mrs Stevens and then for three years more in the gardens at The Grange. He enlisted in March 1917, and went abroad in January 1918. He had already distinction as a marksman. He lost his life in the great attack on April 13th 1918, in the 20th year of his age.

Kent & Sussex Courier 10th May 1918
Pte. Batchelor
Mrs Samson, of Wickham’s Row, Goudhurst, has been notified that her youngest son, Cyril Edward Batchelor, of the -st Royal West Surrey Regiment, age 19, was killed in action on April 13th after being in France four months. Mrs Samson has two other sons serving both having joined voluntarily in Lord Kitchener’s time.