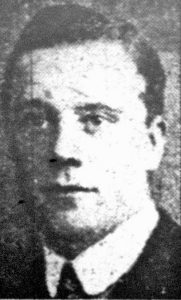 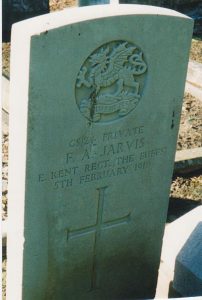 Frederick was born in Margate on 31st March 1891, where he grew up and, where he went on to work as a grocer’s assistant. He volunteered for The Buffs at the start of the war, went to France with them in June 1915, almost certainly came back wounded from the Battle of Loos in October, and married a Goudhurst girl living opposite The Chequers soon afterwards; they had a daughter in 1916. He fought on the Somme in 1916, returned to Loos in early 1917, fought at Cambrai later that year, and served throughout the major retreat and final advance of 1918. After all that, in January 1919 he caught an infection during the demobilisation process and died at Maidstone. Frederick Jarvis is buried in Goudhurst, across the lane behind St. Mary’s Church.

Parish Magazine, St Mary’s, Goudhurst, March 1919
On Monday, February 10th, Pte. Frederick Arthur Jarvis was buried with military honours. The greatest sympathy is felt for the widow and friends. The pathos of the story could hardly be exceeded. Called up as a Reservist in August 1914, Jarvis was through Mons and served through the whole war with only the very slightest of wounds, but he had not been home an hour after all this danger and exposure before he had to complain of chill and in little more than a week he was taken.

Kent & Sussex Courier 14th February 1919
Private F A Jarvis
Private Frederick Arthur Jarvis , The Buffs, aged 28, died at Maidstone Military Hospital on the 5th inst. of pneumonia contracted on the homeward journey. He leaves a widow and a little child of two years. The funeral took place at Goudhurst on the 10th inst., and was of a military character as far as circumstances would permit. The Church was crowded. The Rev. Canon W. A. Raikes officiated. The hymns sung were “Onward Christian Soldiers” and “On the Resurrection Morning” and the organist of the Parish Church played the “Dead March” in “Saul”. Four of the deceased own regiment acted as bearers and the coffin was covered with a Union Jack and lovely wreathes and flowers from many friends. A firing party from the local “Fencibles”(demobilized men and prisoners of war) fired three volleys at the graveside and a bugler sounded the “Last Post”. Private Jarvis was engaged in the grocery business at Margate before he joined the Army. He was for some years with the “H” Reserves and when the war broke out he was sent to France where he remained in active service all through the war. He was wounded first in the arm and later on just below the eye. He has only one opportunity afforded him of coming home and he went through the Mons affair amongst others. He received every possible attention at the Maidstone Hospital and the relatives who visited him there speak very highly and gratefully of this institution and of the kindness shown not only to the wounded inmates but also to the friends who visit the sufferers. Private Jarvis was one of the 4th Army (the first chosen to form part of the Army of occupation in Germany).