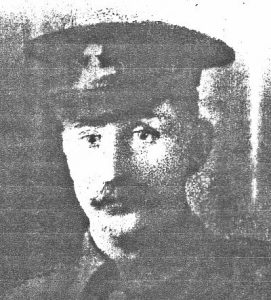 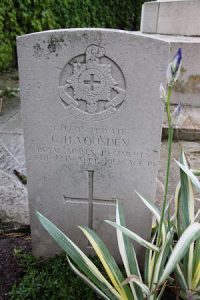 George was born at Hope Mill Cottages on 5th August 1898 where his father was the carter, and he himself worked there and also at Bedgebury. He enlisted in February 1917 at the age of 18½ and, given the shortage of manpower at that stage of the war, would have gone abroad quite rapidly. His battalion took part in the successful opening day of the Third Battle of Ypres on 31st July 1917, and supported other attacks in the ensuing weeks. On 24th September George Vousden was killed beside the Menin Road. He is buried south of Ypres in Spoilbank Cemetery, and is the youngest man on the Goudhurst war memorial to have been killed in action. His older brother, Charles Robert Vousden was killed in 1918.

Parish Magazine, St Mary’s, Goudhurst, November 1917
Pte. George Henry Vousden, 11th Royal Sussex Regiment is missing. There are conflictin accounts as to what happened. Some thought that he was carried off the field wounded, but it seems that this was not so, and he may be a prisoner.

Parish Magazine, St Mary’s, Goudhurst, December 1917
Pte. George Henry Vousden, Royal Sussex Regiment was born and brought up at Goudhurst. Early in life he developed a very earnest and serious frame of mind. He worked for some years at Hope Mill and gained a character for great industry and willingness and readiness to oblige. From there he went into the gardens at Bedgbury but he was not there long as he joined the Army at 18. He had only been a short time in France when he was killed in action in his twentieth year.

Kent & Sussex Courier 14th December 1917
Private George Henry Vousden – (Royal Sussex Regiment), born and brought up in Goudhurst, worded for some years at Hope Mill, and afterwards in the gardens at Bedgebury. He joined the Army at 18 and after passing only short time in France was killed in action in his twentieth year.