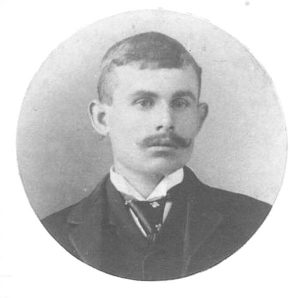 The eldest of 13 children, James was born in Goudhurst on 24th April 1876, and worked for many local farmers and builders, as well as in Surrey, before enlisting in a home service battalion of the Buffs in October 1914. However, he was posted to the 6th Buffs in France in July 1916, joining them initially in frontline action on the Somme. After several weeks’ rest, they returned to the Somme, only to be massacred on 7th October in a frontal attack at Gueudecourt. James Luck was counted among the “Missing” in this attack, and he is commemorated on the Thiepval Memorial.

Kent & Sussex Courier 10th November 1916
Pte J Luck
Private James Luck (Buffs, East Kent) who was killed in action on 7th October in France was born in Church Road, Goudhurst on April 24th 1876. He was well-known locally, having worked for some year with his father at Spelmonden Farm, Horsmonden and afterwards working for Messrs Davis and Leaney, builders of Goudhurst for eight or nine years. He joined the Army 4th October 1914 landing in France 10th July 1916. He was the eldest of the eight sons of Mr Thomas Luck (Risebridge, Goudhurst) who has four other sons serving in the Army.
Two are now in France (George and Charles) and two in England. Of the latter, Frank, who went out to the Front in the early stage of the war, was invalided back to England in November 1915. He had been serving with the Canadians, having enlisted in Canada, where he had worked for eleven years. William Luck is at present serving with the 15th Queen’s Royal West Surrey Regiment at Purfleet.

Parish Magazine, St Mary’s, Goudhurst, December 1916
James Luck, Pte. in 5th Buffss. On leaving school he went to work at Spelmonden, and then leaving the neighbourhood filled various places, but finally settled down at home, working for Messrs. Davis and Leaney. He enlisted in October 1914, and being already 38 years of age he remained in Chittenden, near Chatham for some time. He went abroad in July 1916, and lost this life on Oct 7th.