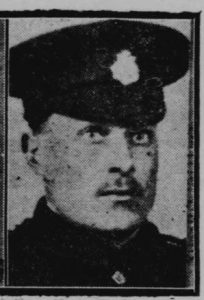 John Colvin’s parents came from East Sussex but had moved to Tranmere, opposite Liverpool docks, several years before his birth on 4th March 1897. By 1901 the family were back in our area and living in Flimwell, where John worked as a carter’s boy before the war. In June 1914, aged 19, he married 18 year old Elizabeth Grigsby in Kilndown where they appear to have lived with his parents at Rosemary Farm, Flimwell. He enlisted in the spring of 1916 and was posted to the East Surrey Regiment’s brand new 13th Battalion. For ten whole months after landing in France in June 1916, the battalion was either behind the lines or manning quiet sectors of the front. On 24th April 1917 it took part in an attack for the first time, at Villers-Plouich near Cambrai, and John Colvin was recorded as “Missing”. His name is on the Thiepval Memorial.

Kent & Sussex Courier 15th June 1917
Flimwell – Pte. John Colvin
Private John Colvin, husband of Mrs Colvin of Rosemary Lane, has been killed while serving in France. Private Colvin joined in January. Was sent to the Western Front on March 16th and notification has been received from the War Office that he was killed in the advance on April 24th. Besides the widow there are two little children. Previous to joining up Private Colvin was employed by Mr Young of Pillary Farm.