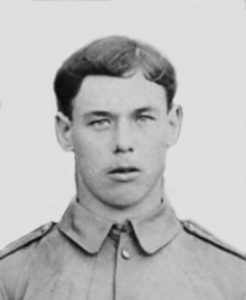 Born in Flimwell on 14th September 1891 he was known in the family as Jack. He was a farm labourer living and working at Three Chimneys Farm on the Bedgebury Estate when war broke out on 4th August 1914. Despite no previous military involvement, he enlisted only four days later, joining the 1/5th Buffs and sailing with them to India in December. Like Herbert Stone, he was killed in the Battle of Sheikh Saad on 7th January 1916 and is buried in Amara War Cemetery.