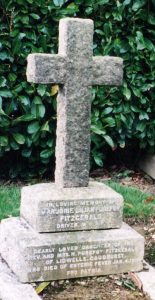 Grave in the Victorian Cemetery, Goudhurst

Marjorie was born on 11th April 1898 at Wellington College in Berkshire, where her father taught science. In 1908 he brought the family to Goudhurst and established a market garden at Lidwells; early in the war he made the house available as a hospital, and Marjorie helped there for a while. Though described as “frail and delicate”, she is believed to have worked as a driver for the Women’s Legion before joining the Women’s Royal Air Force in the same capacity in August 1918. The only female victim of the Great War commemorated on our parish war memorials, Marjorie Fitzgerald died in Tunbridge Wells as a result of typhoid and heart failure. She is buried in Goudhurst, across the lane behind St. Mary’s Church.

Kent & Sussex Courier 17th January 1919
The Late Miss FitzGerald
On January 8th there was laid to rest in the Goudhurst Burial Ground Marjorie Lilian Purefoy FitzGerald (the second daughter of the Commandant and the Matron of Lidwells Auxiliary Military Hospital) who died on 4th January of heart failure after enteric fever contracted while on active service as Driver of the W.R.A.F. at the early age of 20. The service was conducted by the Rev. Canon G. F. Coleridge Vicar of Crowthorne, Berks assisted by the Rev. Canon W. A. Raikes, Vicar of Goudhurst. There was a celebration of the Holy Communion at 8.30am. This was followed immediately by the funeral service. The coffin was covered by the Union Jack on which were placed two wreaths, one of evergreen and the other a beautiful wreath of flowers, tied with the colours of the W.R.A.F. Many other wreaths were laid on the grave. The patients of Lidwells Hospital lined up on either side of the church porch, saluting the coffin as it was borne through. During the service the organist of the Parish Church played “O Rest in the Lord” (Mendelssohn), and at the end Chopin’s “Funeral March”. Great sympathy is felt throughout the district for the sorrowing family, all the members of which have done very valuable work during the war.