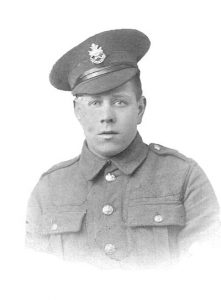 Percy was born at Pope’s Row in Kilndown, in May 1899, attended school in Kilndown and later in Goudhurst, and was a waggoner’s mate at Finchcocks when called up in June 1917. In April 1918 he was one of many young recruits sent abroad prematurely when the minimum age was cut from 19 to 18½ because of the German offensive, which had reduced the 7th Northants to about 50% of their proper strength. They were starting a lengthy period of training and re-grouping when Percy joined them in France, and only resumed the attack on 7th October during the final advance near Cambrai. Percy Brissenden was killed three days later and is buried in Cagnoncles Communal Cemetery. 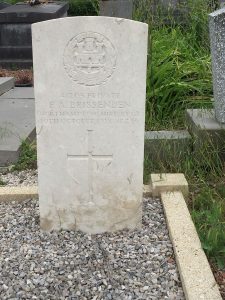 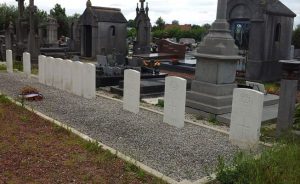 Parish Magazine, St Mary’s, Goudhurst, December 1918
Pte. Percy Alban Brissenden, Northamptonshire Regiment, was born at Kilndown and educated at Kilndown and Goudhurst Schools. He worked for Mr Hugh Wickham at Mount Pleasant and Finchcox, and joined the army as soon as his age allowed. He was drafted to France on April 1st, 1918 a the moment of emergency and unable to come home though leave was due. He was killed in action on October 10th in his 19th year.

Kent & Sussex Courier 15 November 1918
Pte Brissenden
Mr and Mrs Alban Brissenden of Bluecoats Lane, Goudhurst have been notified that their eldest son Private Percy Alban Brissenden (B. Co. – th Northamptons) was killed in action on October 10th. He was born in Kilndown and attended the Kilndown Schools until the last two years when his parents removed to Goudhurst where he finished his education. On leaving school he went to work for Mr B Hugh Wickham, first at Mount Pleasant with his father and later at Finchcox where he stayed until he joined up at the age of 18 and was sent to Staffordshire for training then to Nottingham and then to Doncaster. He was drafted to France on Easter Monday without time for final leave not having been home since last Christmas. He was a grandson of Mr John Elmore, formerly of Maidstone and was only 19 years of age.