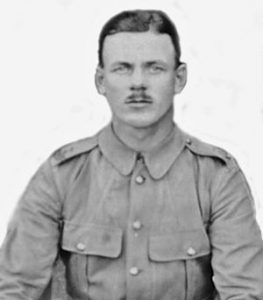 (Note: The name “W. Simmons” was inscribed on the brass and original stone war memorials in Goudhurst. It is absent from the contemporary wooden memorial inside the porch of St. Mary’s Church. Extensive research undertaken has conclusively identified this individual as Philip Christopher Simmons, born in Norfolk in 1885 and, when war was declared in August 1914, employed by the Jessel family as first footman at Ladham House, Goudhurst. During the process of refurbishing the stone memorial in 2014, the opportunity was taken to correct his initials, if only to ensure that people reading his name in future will not be misled.)

Philip was born in Ditchingham, Norfolk on the 17th November 1885. From census returns he appears to have been known in the family as Christopher, probably to distinguish him from his father whose first name was also Philip. By 1911 he had left the family home and was employed as a footman for the Jessel family at their London home at 31 Hill Street, Mayfair. The Jessel family also owned Ladham House, Goudhurst where he was employed as first footman when war was declared in 1914. It was while in Goudhurst that he became known as “William” and his name was originally recorded on the war memorial as W. Simmons.

Although he belonged to the very same battalion as many men from our parish, and had sailed with them to India in October 1914, he later joined an advance party sent to Mesopotamia in August 1915. He appears to have been among the British force besieged, and eventually captured in April 1916, by the Turks at Kut-al-Amara. He died as a prisoner of war, and is commemorated on a memorial in Baghdad (North Gate) War Cemetery.

Kent & Sussex Courier 12th January 1917
The Death Roll
The late Private P C Simmons (generally known as “William”) was for several years first footman at Ladham House, Goudhurst. He joined up in the 1st-5th Buffs in October 1915 and went to India with that Battalion. He then volunteered for service at the Persian Gulf. He was one of the besieged at Kut with General Townshend, and was taken prisoner of war to Angora, in Asiatic Turkey. The hardships of imprisonment, however, proved too great for him and we regret to hear that his death took place last month.