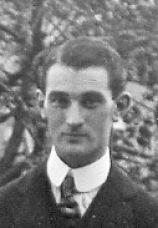 Born in Goudhurst on 8th June 1881 he was the eighth of nine surviving children of James Sanderson Clarke, Vicar of Goudhurst from 1864 to 1910 with hobbies including antiques, football and motor-cycling, he was a stockbroker living in London when was declared. Initially he served in Kent as a motor-cycle despatch rider before joining the he joining the 6 Buffs in September 1914. Stewart qualified in machine-gun work while still based in Kent, and in February the battalion went to Aldershot for a period of more advanced training. He was promoted to sergeant in April 1915 and eventually became machine-gun instructor to the battalion, which finally set sail for Boulogne on 1st June 1915, about nine months after he had enlisted. He was killed in action at the battle of Loos and his name is on the Loos Memorial at Dud Corner cemetery.

Parish Magazine, St Mary’s, Goudhurst, November 1915
Sergt. Clarke, who was killed on October 13th wa a younger son of the late Vicar and our sincerest sympathy is offered to Mrs Clarke and her family in this their second bereavement. It will be remembered that the eldest son Basil was lost with many other brave lads of the Canadian contingent on April 14th.

The Captain of Sergt. Clarke’s company wrote with reference to his work as a soldier. In the whole battalion there was hardly a man more looked up to than Sergt. Clarke and this regard he had won for himself entirely by his own personal merit. Of all that he meant to me I can give you no idea. I always looked on him as a brother officer to whom I could go for advice, and one whose advice was always worth taking. The men of the machine gun section absolutely worshipped him and whatever hardships they have had to go through, there was never any complaint, because they knew they could trust their Sergeant to get the best possible for them. His body has been recovered and he will be buried with the other men of the Buffs who were killed at the same time.

This is a noble testimony. Sergt. Clarke was not a soldier by profession: he had work in the Stock Exchange, where he was occupying a good position.