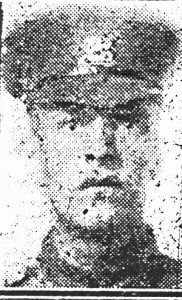 Born on 5th January 1895 at Marden Beech he was brought up in the Goudhurst area. Thomas Waghorne worked as a labourer around the parish and married Lily Brooks in 1915 who at the time of his death was living in Brenchley. He enlisted in June 1916 and joined his unit on the old Loos battlefield in the bitterly cold winter of 1916/17. They moved to the Ypres Salient in June to take part in the successful Battle of Messines, during which they led an attack south of Ypres on the night of 14th/15th June. Thomas Waghorne, unaccounted for after that attack, is commemorated on the Menin Gate Memorial to the Missing. His name is also recorded on the  War Memorial in Brenchley.