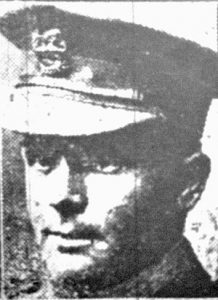 Born on 27th September 1896 and brought up in Goudhurst, he was one of the eight boys who made up the village’s first Scout Troop in 1910. He worked as a gardener before enlisting in November 1915, but was not posted to France until July 1916, joining the same battalion as James Luck but one week later. William Vousden was wounded in the attack at Gueudecourt and taken back to a Casualty Clearing Station for treatment, but he died of gangrene a week later. He is buried in Heilly Station Cemetery. He is also commemorated on his parent’s grave in Goudhurst burial ground.

Kent & Sussex Courier 27th October 1916
Pte. W H Vousden
Mr and Mrs Hugh Vousden, of Morebreddis, Goudhurst, have heard from the War Office that their eldest son, Private William Henry Vousden, aged 20, has been killed at the Front. He was educated at the Village School and as a lad was a useful member of the Parish Church Choir. On leaving school he was employed by the late Mrs Sumner-Gibson at Oakleigh a house-boy and assistant to the gardener. He then went to Lidwells and worked for the Rev. H P FitzGerald in the “French gardens”. On the 9th of November last he enlisted in the Buffs. On the 24th of July he was ordered to France and in due course he did duty in the trenches for nearly three months. He was wounded in the leg by a piece of shell. To save his life it was considered necessary to amputate the injured limb above the knee. Gas gangrene, however, set in and the sufferer passed peacefully away on the 14th of October, having been quite unconscious at the end. He was buried in a little British cemetery “somewhere in France” and his grave will be marked with a cross. It has been gratefully said of the deceased that he was a “good son” – no small praise. His last message, which he got the Chaplain to write to his parents, was “Don’t worry about me”. Much sympathy is felt with the family and especially with the grandmother, whom the deceased had lived with since leaving school.