He was born in Walmer on12th November 1895 and known in the family as Ernest. The family came to live at Holly Villas opposite The Chequers in 1907 after the father retired from the RMLI and became caretaker of Goudhurst Parish Hall. Ernest joined the Royal Navy one month before his 15th birthday, and had served on a variety of vessels by the beginning of 1917. After a brief spell with the Royal Marines at Salonika, he transferred to the Royal Marine 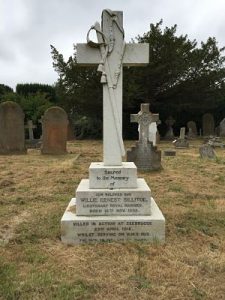 Light Infantry, was gazetted in August 1917, and promoted to Lieutenant on 6th February 1918: he is the only officer on this war memorial. As a member of the storming-parties carrying out the famous Zeebrugge Raid on 23rd April 1918, Ernest Sillitoe was fatally wounded; he is buried in Hamilton Road Cemetery in Deal.

Parish Magazine, St Mary’s, Goudhurst, June 1918
Lieut. William (sic) Ernest Sillitoe, R.M.L.I., was the eldest son of Col.-Srgt. T.G. Sillitoe, and was born at Walmer. He was educated at the Deport R.M. School, and joined his father’s corps as a bugler on October 10th, 1910: and first served afloat in the Queen in 1912. In March 1914, he was at the Depot training and was there at the outbreak of war. For 14 months he served in one of the vessels of the drifter patrol, then on HMS Hibernia, and was transferred to HMS Abercrombie, and for a short time was with the Salonika Field Force. Recommended for a Commission he came home, and after a course at Whale Island, passed his examination successfully, and was gazetted 2nd Lieutenant in 1917, and promoted Lieutenant the following year. He was a most promising young officer. In the Zeebrugge expedition he served on board the Iris, and was shot through the head while engaged with his machine guns. The body was brought to Dover, and buried at Deal with full naval honours on Saturday April 27th.

Kent & Sussex Courier 10th May 1918
Lieut. Sillitoe
The late Lieut. William Ernest Sillitoe, RMLI, who was killed at Zeebrugge, was the elder son of Colour-Sergt Thomas George Sillitoe, RMLI. He was born at Deal. His parents afterwards removed Plymouth and in 1907 came to Goudhurst, which is still their home. On the 10th October 1910 (the 10th of the 10th of the 10th) the lad joined the RMLI at Chatham. His abilities were soon apparent to the various officers under whom he served, and recommendations for advancement was the result. On the 3rd of March 1914, he obtained a first-class certificate of education. He was appointed Lance-Corpl., on HMS —-, was recalled to Chatham Barracks and sent to HMS —– and promoted Corporal. While doing service in the Mediterranean he was transferred to HMS ——. In the early part of 1917 he joined the Salonica Field Forces and was promoted Acting Gunner, RM. Returning to England in May 1917 he joined up at Portsmouth and was granted a commission. Joining the —– Battalion at Deal, he was sent on board the ———— (which formed part of the Zeebrugge expediton on April 23rd) and was instantaneously killed (in the 22nd year of his age). The body was taken to Dover (where the father saw it on Thursday the 25th), and was buried on Saturday 27th April, at Deal, with full naval honours being followed to the grave by Col-Sergt Sillitoe (father) and Private Frederick G Sillitoe (brother), Mr Harry Cooke, RMLI, and Mr A J Green (chief gunner, RN), officers, non-commissioned officers and men of the Depot Royal Marines. The wreaths and floral tributes were very many and very beautiful.
Colour-Sergt Sillitoe, Mrs Sillitoe and family beg to thank all kind friends for showing sympathy with them in their bereavement.