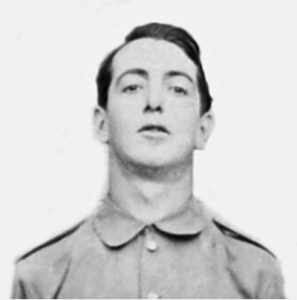 Known in the family as Gus he was born in Goudhurst 20th March 1892, he lived at Clay Hill Mount, worked just round the corner in North Road for Mr. Crouch, the wheelwright and blacksmith, and was considered a good all-round musician. With three of his brothers already serving in the Regular Army, Gus was possibly the first of our villagers to enlist when war broke out, joining the 1/5th Buffs. He was killed in their second engagement which took place at The Wadi and is buried in Amara War Cemetery.

Kent & Sussex Courier 25th February 1916
Goudhurst Man Killed
Private August W. Lovell aged 23 years, third son of Mr and Mrs Albert Lovell of Clay Hill Mount, Goudhurst has been reported as having been killed in the Persian Gulf Expedition on the 13th of January. Before joining the 5th Battalion the Buffs he was employed in the village by Mr Thomas Crouch blacksmith and wheelwright for several years. He was much respected in Goudhurst and was a member of the Village Band for several years and also a good string instrumentalist. He played the euphonium in the Regimental Band in India where he was stationed before going with the Persian Gulf Expedition. The deceased had six brothers, three being regulars and three boy scouts.

Private Charles Lovell, the eldest son of the family (Royal West Kents) was wounded at Mons and taken prisoner of war and is still in Germany.

Corporal Roland Lovell, the second son, (3rd Battalion the Rifle Brigade) after 13 months active service was invalided home with fever and is shortly re-joining he comrades in arms.

Lance-Corporal Albert Lovell (Kings Royal Rifles) after 10 months active service was badly wounded in the chest by an explosive bullet. He expects to rejoin the Army shortly from the Convalescent camp.

A fine recruiting example was set by the deceased who, although he had three brothers at the Front thought it was his duty to help his native land in her time of need and was therefore one of the first sign up at the outbreak of war.

The members of this Goudhurst family are surely doing their bit and doing it well.