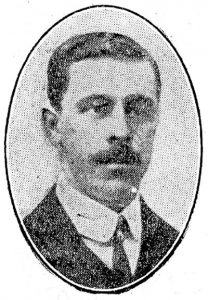 Born in Marden in 1883 he grew up at Iden Green, Goudhurst and served in the army from 1902 to 1905. As a reservist, he was mobilised on the outbreak of war. Wounded and invalided home in October 1914, he came through the ferocious Second Battle of Ypres in April 1915, but was killed in action on the fourth day of the Battle of Loos, leaving a wife and two children. He name is included on the Loos Memorial at Dud Corner Cemetery.

His name is also on the village war memorial in Loose, near Maidstone.

Parish Magazine, St Mary’s, Goudhurst, November 1915
Bertie Mercer Blackman (sic) was born at Marden went to school there: but his family came to Iden Green when he was 13 years old. He attended evening classes at Goudhurst School and worked in the Parish until he enlisted. He was with the colours three years than passed to Reserve. He worked at Little Glassenbury and then moved to Loose, Maidstone. He completed his term with the Reserve and then took on again: and in consequence though 33 years of age he was called up on the outbreak of the War. He was wounded by shrapnel on October 19th, 1914 and was nearly six months out of action. He returned to the ranks on April 17th and was killed by a machine gun in the great advance on Loos on September 15th. He leaves a widow and two children.

Kent & Sussex Courier 15th October 1915
The War
On Sunday the flag on the Church tower floated at half-mast high in memory of Bert Mercer Blackmore who was killed in France on the 28th September. Blackmore, who was 34 years (sic) of age, had been called up as an Army Reservist and had been wounded on a previous occasion. His widowed mother was a daughter of the late Mr Amos Mercer whose aged widow still resides at the old homestead in Iden Green. Mr and Mrs Amos Mercer of Church Road have lost two nephews and three cousins in the course of a month owing to the war.