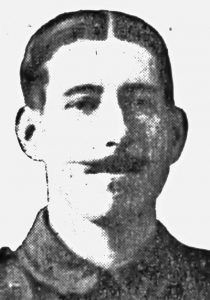 Born in Goudhurst on 17th August 1891, he enlisted in the Grenadier Guards at the age of 17 and was among the very first British troops to land in France after war broke out. He fought at Ypres in 1914, and in the great battles of 1915 at Festubert and Loos. Ernest Brabon was killed during an attack by his battalion at Ginchy on the Somme which paved the way for a major offensive by the Guards Division. He was married, with two daughters. He is buried in Delville Wood Cemetery. 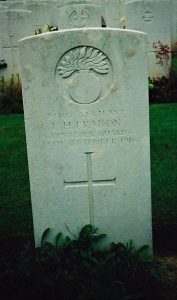 Kent & Sussex Courier 27th October 1916
The Death Roll – Mrs E Brabon has received notice that her husband Sergt. Ernest Henry Brabon, aged 25 years, was killed in action on 14th September. On leaving the village school the deceased was employed on the parish roads with his father. When he was between 17 and 18 years of age and had reached the height of 6ft 1in he joined the Grenadier Guards and spent five years on home service. He went to the front with the original British Expeditionary Force landing in France on the 12th August 1914. He passed through several fierce engagements with only a slight wound and spent two years one month and one day in active service (with ten days break at home). He leaves a widow and two daughters (age 3 years and 2 years respectively). Captain Bailey in a letter to the widow writes; “Sergt. Brabon went forward with an advanced party on the night of September 13th and gallantly led them to their new position (where they were to dig a new line) in the face of heavy rifle fire. He was a gallant soldier and died a soldier’s death which we all hope to do when it comes”. Sergt. Pownall writes “I am sure it must be consoling to know he died leading his men. His platoon asked me to tell you how keenly they feel his loss. He was liked and respected by us all and we all feel his death a great deal. Your husband died quite instantaneously, suffering no pain. He had a smile on his face when I saw him”