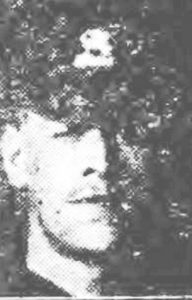 He was born in Kilndown on 23rd November 1893, and in August 1915 married Fanny Poile of Horsmonden. When he was called up in January 1916, he was living at Spelmonden Cottages and working on the Wickham family farm at Finchcocks. He arrived in France on 19th May 1916 and joined his battalion in the Ypres sector, but soon afterwards it was moved south to take part in the Battle of the Somme. His wife gave birth to a daughter on 12th August, but eight days later John Barrow died of wounds suffered during an attack made by his battalion near Guillemont on 18th August. He is buried in Dive Copse Cemetery.

Pte. J. Barrow
Private John Barrow, of the Buffs, who died of wounds received in action on August 20th in France , was the youngest son of Mr J. Barrow, of Popes-row, Kilndown, Goudhurst. He was employed by Mr B. H. Wickham, Finchcox Farm, at the time he was called to the Colours on January 21st of this year. He took part in the great advance on July 1st. He leaves a widow and child to mourn their loss.